Wrecking Havoc for Many More Years Yet! A black Staffie charging down the hill and frolicking with our dogs interrupted Susan and me in our regular run up Fringed Hill last Sunday. Moments later Chris and Joey arrived on their bikes. This was Havoc, but not as we had seen him 12 weeks before.

On Sunday 8th March Havoc had his usual vigorous run up Fringed Hill giving Chris and Joey a good workout on their bikes. No surprise then that Todd Halsey pronounced him in excellent health when Havoc came in for his annual checkup and booster vaccination the next day.

Chris was back with Havoc four days later. Havoc was really off colour. Was this a vaccination reaction? He had been perfect till the vaccination and the trouble had started since his shots. Havoc had a high temperature but no other signs except some back soreness. An anti-inflammatory injection seemed to sort it because at his check the next day Havoc was bright, his temp was normal and he was no longer sore. The diagnosis was open and he was prescribed some more anti-inflammatories. 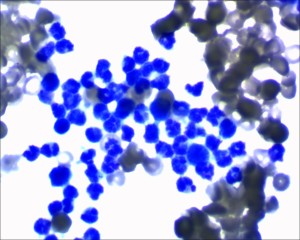 When I saw him three days later Chris reported that Havoc was reluctant to go down stairs and that for the first time he hadn’t eaten breakfast. His temp was normal but we kept Havoc in to run blood and urine tests. They were essentially normal too, but by late morning he was running a high fever. What was going on?

The next day Chris Welland took over, sedated Havoc, and tested the fluid from several joints in case this was an immune-mediated polyarthritis. It wasn’t. Xrays of the spine showed no significant problem but the parts of the chest visible in the Xray looked like there might be some extra fluid between the lung and the chest wall. More Xrays confirmed this and a sample of the fluid was collected and analysed. There were some pus cells and occasional bacteria. Now we were wondering if a lung lobe had twisted, was there a foreign object, even cancer?

Nelson Radiology just down the road are always super-helpful and so we could schedule a CT scan first thing next morning. By now the right middle lung lobe had become filled with fluid and cells, but the CT scan seemed to show a foreign object in a small airway.

Chris and Joey wanted to do everything possible for Havoc and we promptly referred him up to Massey University Veterinary Teaching Hospital. Havoc took the road and ferry trip in his stride and was remarkably bright when he arrived at Massey even though his lung lobe was turning to custard! Havoc was sent off to theatre where the surgeons opened his chest and removed a firm mass of tissue attached to the heart, diaphragm and chest wall. To do this they needed to remove a section of the pericardial sac, the tough bag that encases the heart. A small grass seed was floating free in the pericardial fluid, the cause of all the trouble! 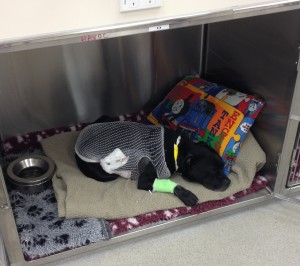 Havoc woke with a tube coming out of his chest to drain any further reactive fluid produced but that was removed three days later and Havoc was on his way home to a quieter life for a few weeks. Even at stitch removal 10 days post-surgery Havoc was looking good, but when I saw him sprinting down the road to greet my dogs on Sunday I could scarcely believe it was him.

And the bill? Chris and Joey got Havoc insured as a pup. This has given them the peace of mind that they can always choose the best care possible for their special boy and pay without pain.