Our smallest Caesarian yet!

Gemini is a pygmy marmoset, normally well under 200g but now 230g at full term. Meg Selby at Natureland zoo called me over for a visit two weeks ago when she noticed some fresh blood smeared on the edge of Gemini’s nesting box. Gemini was just 2 days away from her latest due date and looked ready to burst. Last pregnancy she popped out triplets. It looked like more of the same but that this time we might have trouble.

Meg brought Gemini in to Halifax where we first had to anaesthetise her to be able to examine her. That happened smoothly by filling her transport box with warmed isoflurane vapour. Temperature loss is a major problem in anaesthesia and surgery in tiny animals. Just a few months earlier we had invested in a Darveall computer regulated warming device that warms the isoflurane/oxygen mix as it flows through the tubing to the patient and adjusts the inflow temperature according to the body temperature of the patient. This turned out to be lifesaving.

First I examined Gemini’s vagina through a very small scope and could see that the cervix was still closed. There was no sign of bleeding either. Then we Xrayed Gemini and could see two very large babies inside. 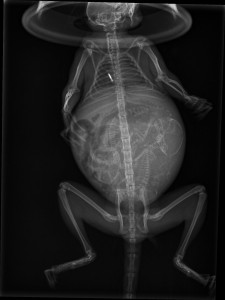 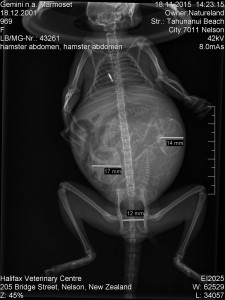 They were never going to come out naturally.

Todd Halsey ultrasounded Gemini and found that the babies hearts were not beating as fast or strongly as expected. We suspected they were post-mature. But why had Gemini not gone into labour earlier? 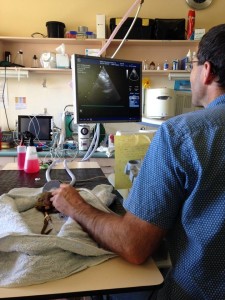 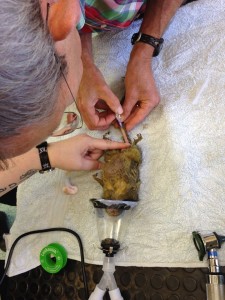 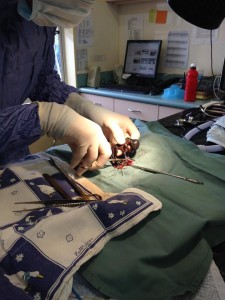 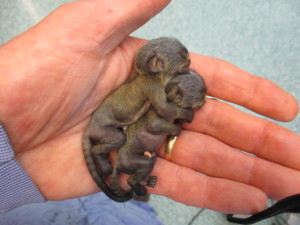 We put an IV drip into her tail vein, prepared Gemini for surgery and delivered two live but very sluggish marmoset babies, each 17g! Down by the cervix was a smaller partly mummified foetus. It must have died some weeks before and may have been the reason the normal birth process wasn’t triggered. We were unable to get the other two breathing and they died.

Gemini took some time to wake up from the anaesthetic. She had cooled a lot in spite of the warmed oxygen. Once she woke she was quite lively, and she needed to be. It was important for her to be back with her social group at Natureland but also important for her to rest. She had to scuttle away from the overexuberant attentions of one of the males but then the group seemed to accept she needed some rest. Not much appetite for two days but she accepted a small insect treat laced with Metacam, her pain relief medication. She was moving round freely, and by day three she was eating well. Now, two weeks later, she is full of beans. And barely a scar to show for it! 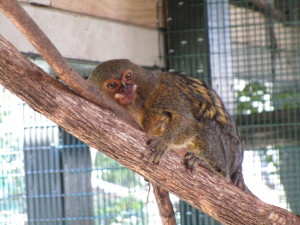 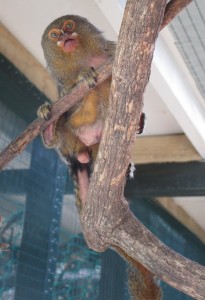