Jenny Fenwick thought she was going to die when she was repeatedly attacked by a raging bull while out on a forest walk with her dog Ben. Ben had other ideas. Laying his life on the line he defended Jenny for hours. Jenny’s partner Terry Win tells the story…..

Ben –  a true lifesaver and our own hero.

As responsible pet owners we all express our fondness for our animals through the ways in which we interact with and enjoy them. We provide them with life’s essentials; water, food and shelter. We willingly provide company, security, loving care and a good life. Above all, what we can give to our chosen dependants is commitment. The promise to be there, cradle to grave. Full, simple, undying commitment. In the manner of ‘give and ye shall receive’ our commitment has been repaid in full.

Let me tell you Ben’s story.

Our life with Ben began on the farm of his working Huntaway parents with him and his litter mates caged in a crate, poo-covered, mud-caked legs everywhere and that unique smell puppies have of milk and mud. Ben was the runt of his litter, tiny compared to his brothers who were all destined for a working life. Badly conformed, weaker and smaller than the others his future looked very uncertain. “You want him or not? He’s no good for working”.

We did want him. We’ve both always supported the underdog. Small enough to stand in our cupped hands, little overshot jaw gripping his lip, he looked excitedly forward as we drove home to his new life.

Ben was our choice of breed. Huntaways are known for their intelligence, robust health and medium size, the latter an important consideration. 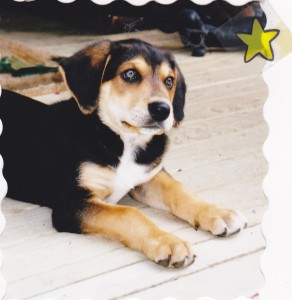 Ben as a puppy

Those first weeks, months and years were filled with great joy for life, energy, growth and learning, interspersed with accidents, damage, pain and repair. He lay on the doorstep as the wind blew the door shut, neatly guillotining the lowest third of his tail. Vet costs had begun.

He bit or licked something noxious and had to have the tip of his tongue removed. He snapped one, then the other, cruciate ligaments in his hind legs. His vet repaired them with elephant grade nylon as his growth rate continued to be phenomenal and beyond all expectations.

He ran into a heavy twig while running after game and  pierced his chest cavity all the way to his lung. He got hung up on a bluff by his hind leg stuck in a tree root. It’s not easy to help a 50kg dog when you first have to lift him while perched on a vertical bank and let’s just imagine transporting the same in a wee tin dinghy.

Imagine the damage when he launched off a bank onto, and under, his favourite car as it returned home. He became a blood donor since a dog of his size could afford to help.

Ben loved getting wet any time he could; loved running and chasing birds. He loved hunting pigs, possums, rabbits and keeping up with whatever people were doing in his world, his neighbourhood. He loved lazing on the couch – don’t we all? He would systematically find those tasty little morsels that quail leave behind. He would rush out into the sea and while standing in a channel, turn and bark, asking which way now? What next? Always thinking ahead, always looking for more activity and interest.

Be careful what you look for.

One fine walk in the Whangamoa-Hira forest turned to more desperation than interest and more horror than activity. Jenny and Ben were about 8km from home when they were met by an adolescent bull whose owner had turned him out on unknown country with no fences and no company. Not an example of responsible ownership. They soon found themselves subject to his unwanted and increasingly violent attention. For almost three hours Ben defended Jenny and  bravely  fought off the attacker who trapped and injured them both, again and again, through the scrub, blackberry, gorse and pine forest. While cowering against against a  tree trunk, stuck thigh deep in pine litter and facing the snorting slobbering bull yet again, Jenny mentally wrote her and Ben’s epitaph in the form of an imagined headline, “Hira woman killed by raging bull – dog dies defending her”

But Ben wasn’t ready to lay down and die and yet again summoned the courage and strength to distract the beast, again to his own cost. Another stomping, another toss in the air from those deadly horns. Getting nearer home, Ben’s barking could be heard,  distressed and unusually persistent. Did I mention Huntaways have great voices? I ran into the forest toward the commotion and came upon Ben, covered in mud and blood from nose to tail barking madly at a still agitated, snorting, equally bloodied and muddied, steaming hot, black and white bull. Unsure of where to turn for escape  I considered leaping from a blackberry covered bank and noticed the soles of two shoes level with the bush at my, and Ben’s, feet.

The shoes were attached to a brutalised, bloodied and torn Jenny, and with some frantic effort and with Ben continuing to defend against ongoing bull rushes the torn, terrified and hysterical got safely over the home fence. Ben had got us home.  From that day on Ben had nothing to prove. He owed us nothing. His commitment had saved Jenny’s life many times over during those hours, and we owed him. 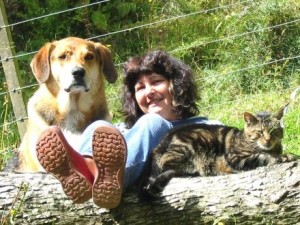 Ben’s adventures continued over many more years and though life threw more at him, his spirit remained high and he remained interested and active. Only once, despite all his events, did we ever hear anything approaching a complaint from Ben. He groaned, more a sound of resignation, as he lost his grip on a narrow concrete wall over a culvert. He groaned as he slid over the edge and his claws lost their traction. He fell four metres, throwing himself sideways into a muddy, salt water and waste metal filled drainage creek. In that moment our hearts sank at the thought of the inevitable outcome.

But Ben survived, having missed every treacherous obstacle that threatened to pierce, tear or impale him. One of the few incidents that didn’t assist his vets income. He never again went near that bridge and neither did we ask him to. By then he was 12 and beginning to be a bit fragile, needing more of our care than challenges. He was never a challenge avoider and keeping him mentally active and interested became more important than the physical needs.

Daily walks of 6-10km, meeting up with his dog and human friends, and talking at them, or adventuring, gradually became shorter and less playful and he would be easily hurt by playful friends or accidents, but his willingness and his spirit never failed. To the end he wanted to go, to respond, to see, to smell, taste and comment on, (that Huntaway voice!) and experience, everything.

At almost 14 Ben’s mobility and health suddenly declined. Only in the final week did the walks stop, his breathing came less easily, and our commitment to him meant we had to make an obvious choice for him.

It came readily because we were committed to him. Although sad it came through knowing he had lived well and deserved to die well, with dignity,  trusting, and while being comforted and loved. It came because he committed to us and gave back more than we could have ever asked for or expected.

We will forever thank our Ben. We loved him and will remember his gentle yet courageous nature. He was literally our hero and a lifesaver.

On International Dog Day 2015, Wednesday 26th August, Halifax Veterinary Centre is celebrating some of the great things dogs do for us.