Dental Pain in Cats and Dogs

“She is playing like a kitten and she hasn’t played in years!”

It was just 48 hours after Tinkerbell had had a major dental procedure with several teeth extracted and Alistair Mapperley was so happy.

Two days before it had been a different story. Tinkerbell was a 16.5 year old cat, a recovered diabetic with a bad back and periodontal disease. She needed a general anaesthetic to clean her teeth and Alistair and Julie were worried. Tinkerbell was their baby and they wanted to be present throughout the procedure to make sure she was fine. So we scheduled it for a Saturday morning. 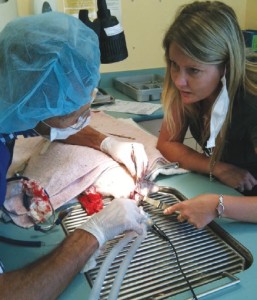 It was expected to be a relatively brief and straightforward procedure. Preanaesthetic blood and urine tests had shown that Tinkerbell’s body systems were in good shape for her age. Nonetheless she was supported with IV fluids, and lots of monitoring equipment.

But once Tinkerbell was anaesthetised and we could check her teeth properly we found she had a big tooth root abscess under the right upper fang, and a large cavity in the root of the right lower fang.

Extracting major teeth in geriatric cats does have some risks. The tooth roots are long and often brittle, so it is easy to leave fragments behind. There is usually a degree of osteoporosis (bone weakening) and it is especially easy to fracture the lower jaw.

I was pleased Alistair and Julie were present to see just how bad the tooth problems were, but a little nervous about getting the procedure 100% right.

Fortunately things went well. Tinkerbell was pretty drowsy for the first 36 hours and then she started playing, chasing her 18 year old mother Carmel, making up for the years lost to toothache. 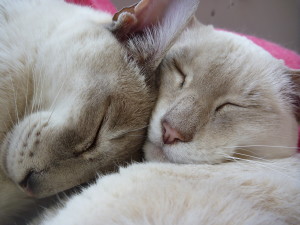 Without the throbbing pain of toothache Tinkerbell could at last enjoy frolicking in games of rough and tumble. Of course, she then put her back out again, but that’s another story!

How could devoted owners like Alistair and Julie not have seen that their cat was in pain? How could this have been missed on the countless veterinary visits when Tinkerbell was in for her diabetes and back pain?

All too easily, it seems. 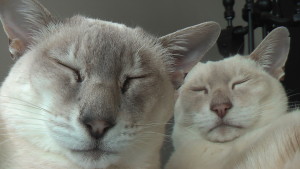 Not only is it generally difficult to examine a cat’s mouth, teeth and gums thoroughly when it is conscious, but cats are also masters at masking pain. They typically become more withdrawn, less interactive, play less and sleep more. Often these are interpreted as just signs that the cat is getting older. As Tinkerbell showed, sometimes more is going on beneath the surface. Sometimes it means the cat is suffering in silence.

So is dental pain common in our pets? We think so.

Periodontal disease is common in people too. In fact it is the most common reason we lose our teeth. Usually there is no pain. It is often called ‘the silent disease’. It is a disease that sneaks up on us. If you do have sore gums be thankful you got a warning, and take action.

Most pets do not seem bothered by their periodontal disease, even when it is severe, eroding the bony attachments of the teeth. Some, however, have obviously tender gums. It is unclear why there is this variation in pain.

One constant of periodontal disease is bad breath, so even if your pet isn’t suffering pain it will be suffering some social isolation. We tend to push away the nuzzles and licks when our pet’s breath stinks. You know why you are doing this, but your pet doesn’t understand.

We expect tooth fractures to be as painful in pets as they are in people, especially when the pulp cavity is exposed. In cats, traffic accidents are the most common cause . Dogs can also fracture teeth chewing on stones or hard bones and catching sticks. Some pets drool, rub the affected area or obviously avoid chewing on one side and thus indicate discomfort and pain. However it is common at routine annual health checks to discover large slab fractures of teeth in dogs that have shown no signs of discomfort. Dogs, too, are masters at masking pain.

It is common for fractures in which the pulp cavity is exposed to result in a tooth root abscess. Germs from the mouth infect the pulp, spreading to the tooth root and causing an abscess in the bony socket. There may be no outward sign and Xrays are needed to confirm whether an abscess is present. All fractured teeth should be Xrayed because of the high incidence of unrecognised tooth root abscesses in these teeth.

Tooth root abscesses cause the classic toothache pain in humans – a throbbing, stabbing pain that can’t be ignored. In dogs and cats the tooth usually needs to be extracted, though root canal treatment is sometimes possible. After extraction these pets often behave just like Tinkerbell did. They frolic and play. Life without pain is so good!

Not all tooth root abscesses cause pain in people, and presumably pets. However the chronic infections cause many other health problems so they should always be treated.

Cats develop a painful tooth problem that we never see in dogs, called feline osteoclastic resorptive lesions (FORL). In this condition the enamel protecting the tooth is dissolved, often just at or below the gumline. When the lesions occur above the gumline the red tooth pulp can often be seen bulging out to the surface of the tooth, Not surprisingly these lesions are very sensitive to touch! 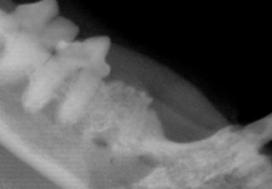 FORL has caused the tooth crown to break off

Cats will often avoid chewing on the affected side. When we examine these cats we sometimes see clean teeth on one side and stained, tartar covered teeth on the other. This can be one of the clues that there may be FORL below the gumline. Dental Xrays are invaluable in diagnosing FORL and in planning their treatment. Extraction is the only treatment option. In cats in which Xrays show that the roots of affected teeth are resorbing a modified extraction technique called crown amputation can be done. This is simpler, quicker and less painful for the cat. It is a lot cheaper too, typically saving the extra cost of the Xrays.

PS. Tinkerbell’s story does end well. She lived happily on another 4 years, eventually put to sleep at twenty!