It was good to be a Halifax client!

This morning I walked the dogs down to the back beach in Nelson.

Stunning clear day with some high wispy cirrus. The sea was mirror flat. My 13 year-old dog Bartok loved it. But just two days before he was at death’s door.

I sent this email to my Halifax Vet Centre staff:

Congratulations all. You are a fantastic team!

Yesterday morning Susan and I walked the DOC track up Barnicoat. It was quite warm, but not excessively so and Bartok got up the hill fine. It was when we were 2/3 of the way down the road that he suddenly starting lagging well back. We waited at Bluegum corner. He took ages to catch up the 100m. I led him to the large shallow pool where a small stream crosses the road. He just stood in it. Didn’t want a drink. He wasn’t breathing very heavily. He wasn’t hot. Peeled back his upper lip. His gums were a pale blue-grey. Oh shit!

Straight into Halifax with all the car windows open. Carried him in and then the team took over.

It was very impressive. I checked his heart and pulse (heart quite audible and regular, HR 150, weak femoral pulse), helped hold him for the chest Xrays which Todd Field had already set up and then stood back.

The ECG happened (TF) while Chris Welland set up the ultrasound. Todd took bloods then measured the vertebral heart score. The big heart score of 12.8 (normal is <10.7) was consistent with tamponade. By then it was immediately apparent on the ultrasound that Bartok had cardiac tamponade. Haemangiosarcoma of the heart muscle was the most likely cause. Susan and I had already discussed on the way down the hill that if that was the diagnosis then we would euth Bartok right away. Not a bad last day to walk up Barnicoat, we said. We would hope to be able to do the same.

As we were watching the process unfold Di brought us water and coffees. Vania took more blood to rule out rat poison or clotting disorder. Activated clotting time was normal.  The other blood tests were normal too.

Chris couldn’t find a tumour in the heart muscle (there is a very small suspect area in the right atrial wall) and no free fluid in the abdomen, nor sign of masses in the liver.

Susan had an appointment so I took her away as Chris prepared to drain the blood from the pericardium. As we drove home Susan was fulsome in her praise of the amazing team work she had just seen. Everybody swung into action and seemed to know just what to do without any instruction or fuss. Lots of high tech stuff happened in a short time frame and in a logical order. In spite of it being a critical care situation no one seemed flustered. All seemed calm, organised, purposeful and very very competent.

An hour later Tara rung with the news that the pericardiocentesis had gone well and that Bartok was now resting comfortably. 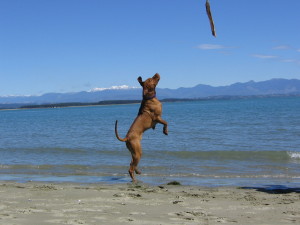 A much younger Bartok at Nelson’s back beach

As I client I was impressed. Susan was very impressed. As a team member and colleague I was very proud of the team.

Cardiac tamponade is when fluid builds up in the pericardial sac, the tough fibrous bag that encloses the heart. This fluid is most often blood but can be another effusion. The bleeding most often comes from a tumour of blood vessel walls called haemangiosarcoma. This is a malignant tumour with extremely poor medical and surgical prospects when it is in the heart muscle.* A blood vessel in the tumour bursts and as the pericardial sac fills and distends with blood the increasing pressure prevents blood returning to the heart and filling the right atrium. So the heart can pump out only a small volume and has to speed up to meet the body’s needs. That’s why Bartok had a weak fast pulse. It was like he was in shock.

However IV fluids don’t help in this case. The blood needs to be drained from the pericardial sac, a procedure called pericardiocentesis. This is what Chris did, guiding the needle placement by ultrasound. The usual thin 22g needle didn’t work because the blood was very thick and clotted so Chris used a 14g needle (you donate blood through a 16g needle). I am glad it was Chris and not me doing this job. It takes skill and a steady hand.

Bartok’s diagnosis is idiopathic cardiac tamponade. Idiopathic is just a fancy way of saying we don’t know what caused the bleeding. Chris will repeat the ultrasound in two weeks to see if there is any further sign of a cause.

In the meantime we just enjoy each day as it comes. That is what dogs are very very good at!

*Chris and I did successfully remove a haemangiosarcoma from the right atrium of an English bull terrier nearly 20 years ago. It was clear from the ultrasound that it was attached to the atrial wall by a thin stalk and we (mistakenly) thought that made it unlikely to be a haemangiosarcoma. We cut out the affected section of the auricle, the ear-like projection of the atrium and just sutured it up with very fine stitches. Technically challenging because the heart continues to beat at about 120 beats a minute, so there’s a continually moving target! The dog came through the surgery well and had a great life for another 5 months before tumour spread affected his quality of life. His owner said it was the best money he ever spent.

The team at Halifax operated like a pit crew!

Anyone who has read or listened to Atul Gawande will know that this is high praise. Dr Atul Gawande is a Harvard surgeon and medical philosopher who has demonstrated that when medical teams operate like a well-drilled pit crew then they deliver much better patient outcomes. For a review of his latest book go to

To see him in action in one of his many TED talks follow this link: