We relish Nelson’s high sunshine hours but some of our pets pay a high price for their UV exposure. UV light overexposure causes a type of skin cancer called squamous cell carcinoma (SCC) in our pets, rather than melanoma. It is almost exclusively areas of white skin on cats and dogs that are affected. Their hair coats are great protection but those areas with little or no hair covering are where the cancers occur. In cats the tip of the nose, the ear margins, the lower eyelids and the area of thinning hair between the ear and upper eyelid are the most common areas affected. In dogs the scantily haired bridge of the nose and in those that sunbathe the lower flanks and belly are where we most often see problems.

What should you look for?

The first signs are localised areas of scaly skin which become small scabs. On the ear margins and on the flanks and belly these scabs can become quite large and crusty. If dislodged they will leave a bleeding ulcer. These ulcerated lesions are more of a feature on the eyelids and nose probably because scabs are quickly dislodged there. In cats the early lesions are often mistaken for healing fight wounds. They look very similar but if a scab persists more than 2 weeks get it checked 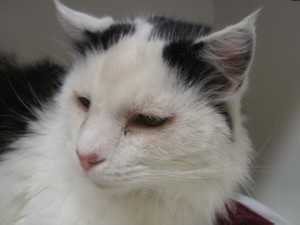 The small scab on the nose is squamous cell carcinoma 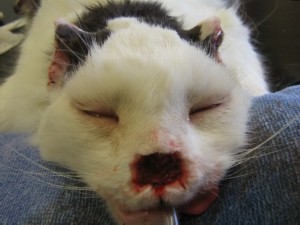 The same cat with nose resected after the cancer had progressed

Can you protect your pet? Yes, and prevention is much better than cure!

For sun-loving pets with at-risk white skin, keeping them indoors during the high UV times from 10 a.m. – 4 p.m is the most practicable step.

Having a shade sail over their run, or siting it under a shade tree, makes sense for outside dogs.

Sunsuits are can be bought or made for dogs. They need to extend right down the body to protect the flanks, belly and groin if these have non-pigmernted (white) skin.

Sunscreen can be successfully applied to the ears of cats and the noses of dogs and will reduce risk. Use a high UV filter screen. Unfortunately it can’t be applied to eyelids, and cats lick it off the at risk area of their nose too quickly for it to be much use. This will be true for some dogs when it is applied to their flank and belly areas but it is worth trialling with at-risk dogs. Some will leave the screen alone, especially if applied just before a distracting morning walk.

Note: Tattooing is not effective for preventing SCC. We advocated this many years ago, but we were wrong.

Be vigilant and get any suspicious scabs, ulcers or swelling  checked promptly. Not all skin lumps are cancer, and not all skin cancers are malignant. However the worst strategy is watch and see if they grow. This can end in disaster!

We recommend getting all lumps tested, measured and mapped, a process called tumour mapping.

Early diagnosis and treatment, as with most cancer, are the key to success. Cryotherapy (freezing) can be effective in early lesions but recurrence is more common with this mode of treatment. The good news with SCC is that it usually spreads to other parts of the body relatively late in the disease process so early diagnosis and treatment by complete excision is usually curative.

But this comes at a cost – the ears, nose, or most challenging, a section of eyelid may have to be removed. For some owners the prospect of the altered appearance of their pet after surgery is enough to put them off this option. Other owners say “Well she never looks in the mirror anyway!”

Even easy to operate areas like the flanks and belly can be challenging when the cancer is large.

Roxster was a wonderful American bull terrier with only one bad habit. He loved to sunbathe. And that didn’t seem to be a bad habit until he got to 8 years old and started developing scabs on the hairless white skin of his belly and groin. One become swollen, infected and quite a large growth in just a few months.

It was removed successfully but once he started sunbathing the next summer a similar growth developed fast on the other side of his penis. It needed a large skin graft to successfully remove it all and close the surgical wound. The red line marks the incision necessary to remove the tumour and create the skin flap on his thigh that would be rotated down to cover the defect left by the tumour removal. There was more spare skin available around the thigh to close that gap. The second photo is 10 days after the surgery. 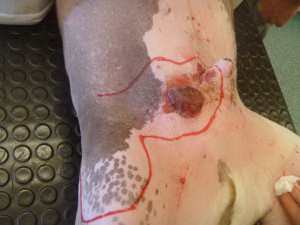 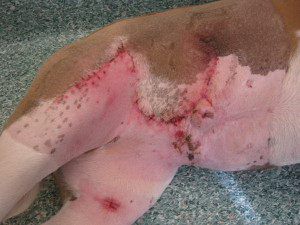