Inflammatory Bowel Disease (IBD) is a term given to a group of diseases in which the intestinal wall is infiltrated by inflammatory cells and which respond to anti-inflammatory medication.. Its main symptoms in cats are vomiting, diarrhoea, weight loss and changes in appetite. If your cat suffers from one or more of these signs, read on.

IBD is a puzzling disease. We don’t really understand why it develops, why some individual cats (and in dogs, some breeds) are affected, why there is a poor relationship between clinical signs and the severity of the lesions in the bowel, and why there is such a variable response to treatment. This article summarises current knowledge about the causes of IBD, diagnosis, and treatment.

How Does IBD Develop?

It‘s thought that the initial damage is caused by bacterial infections. The inflammatory response to bacteria and their toxins causes increased permeability of the intestinal lining (mucosa) to normal dietary proteins. Because these proteins have penetrated through the mucosa into body tissue they are now seen by the body as foreign invaders (antigens) and the body’s immune system starts reacting to them. In the most common form of IBD, this reaction is dominated by white blood cells called lymphocytes and plasma cells. The plasma cells produce specific antibodies against perceived antigens which leads to an ongoing inflammatory reaction. Whenever dietary proteins to which the animal has produced antibodies are eaten an inflammatory reaction can be triggered. Sometimes the inflammatory reaction is dominated by other white blood cells; eosinophils, neutrophils, macrophages.

IBD can affect any part of the bowel. Inflammation of the stomach is called gastritis; of the small intestine it is enteritis; of the large intestine, colitis. The site of inflammation largely determines the symptoms. Gastritis is characterised by vomiting and no diarrhoea. Enteritis typically causes a large volume diarrhoea with no urgency.. Colitis is usually associated with urgency and frequency, so that the cat is more likely to soil inside, and the soft stools may contain mucus or blood. The small intestine is the organ most frequently affected in cats.

IBD is sometimes classified by the predominant symptom into three groups: those with vomiting, those with diarrhoea and those with both.

Vomiting is the most common presenting sign. Many cats vomit intermittently but as the frequency increases or there are signs of weight loss, a change of appetite, and sometimes diarrhoea, they are taken to a veterinarian. Cats are usually very private about their toilet behaviour. Consequently diarrhoea may not be noticed by the owner until the problem is so severe that the cat is incontinent and soils inside. To add to the difficulties, the symptoms of IBD may be cyclic, varying in frequency and severity.

Cats infected with the feline immunodeficiency virus (FIV) have a higher incidence of IBD. It seems likely that this is because they have a poorer resistance to the bacterial infections that may cause the initial damage to the gut lining.

How is IBD diagnosed?

The short answer is – with difficulty!

The difficulty is firstly because many other diseases in cats share the same symptoms as IBD. Many of them are not even gastro-intestinal diseases, but diseases affecting other organs. Hyperthyroidism, chronic renal failure, liver disease, pancreatitis, sugar diabetes and a number of cancers fall into this category.

There are also many gastro-intestinal (GI) diseases that can be confused with IBD. the diseases caused by protozoal parasites like Giardia and those caused by the bacteria Salmonella and Campylobacter can also mimic IBD. Cancer of the bowel, and especially lymphoma, share the same symptoms as IBD.

So the first task is to exclude the other possiblities. The physical exam and a screening panel of blood and urine tests can normally exclude all of the non-GI diseases.On the other hand, a positive culture of Salmonella or Campylobacter does not prove they are the cause of the symptoms. Cats can be asymptomatic carriers of these germs.

The second difficulty is that there is no single test that unequivocally diagnoses IBD. Classically the diagnosis has relied upon histology – the microscopic evaluation of small samples of tissue gathered from throughout the bowel. Unfortunately there is as yet no universally accepted and consistent grading system for reporting these findings. The difficulty is greatest in mild to moderate cases.

There is also considerable variation in the degree of severity of symptoms seen with similar levels of inflammation. Furthermore, the observation of clinical severity is heavily dependent on the pet owner. Outdoor living cats with private toilet habits can be hard to observe meaningfully.

Endoscopy is the tool whereby the lining of the bowel can be examined without surgery. This is also the least invasive way to collect tissue biopsies. Unfortunately many cats suffering from IBD do not have lesions that can be seen with the endoscope.

Ultrasound is useful in experienced hands for diagnosing IBD in cats and this non-invasive technique is now a primary investigation tool at Halifax. since it is helpful in screening for other abdominal abnormalities at the same time 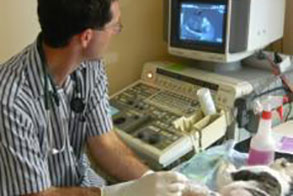 How is IBD treated?

There are two main components to the treatment plan: dietary modification and immunosuppressive therapy.

Mild cases of IBD may respond to dietary modification alone. The dietary modification is based on feeding proteins that won’t provoke an allergic or inflammatory reaction in the bowel. These must be proteins that the patient has not encountered before, and so has not had an opportunity to become sensitised to. Duck, rabbit, possum, kangaroo or horsemeat are options commonly tried. These can be used as the basis for a home cooked diet, usually with rice as the carbohydrate source. There are also commercial diets available for this purpose. Be aware that many commercial diets that are labelled rabbit or duck may contain other animal proteins. Be guided by your veterinary team.

Another approach has been to create non-allergenic proteins. Proteins are made up of amino acids which link up to form peptides. These in turn combine to form specific proteins. Ordinary animal proteins are hydrolysed into their peptide constituents and recombined forming novel proteins that the body does not recognise as allergenic.

These are available as fully balanced diets from veterinarians.

Corticosteroids are the main class of drug used to suppress inflammation in IBD. Prednisone or prednisolone are usually used as a daily or even twice daily tablet, with a higher dose initially, tapering as control is achieved. Cats can be notoriously difficult to administer pills to, so some cats need injections of long-acting corticosteroids every 3-4 weeks. Blessedly, cats tolerate corticosteroids well

Metronidazole is often helpful. This is an antibiotic that is effective against Giardia but also modifies the body’s inflammatory response, particularly something called cell-mediated immunity. Sulphasalazine is widely used in humans and in dogs with colitis. It breaks down in the colon to release aspirin which has a localised anti–inflammatory effect. It can be used with caution in cats.

Severe inflammation of the last part of the small intestine interferes with the absorption of Vitamin B12 and folate. Many cats with longstanding IBD benefit from B12 injections and supplementation with folate.

What is the outlook for cats with IBD?

Most cats with IBD improve substantially with treatment. Some are able to go off immunosuppressive therapy and be managed with non-allergenic diets alone. However many cats need lifelong immunosuppressive medication.

It is thought that some severe forms of lymphocytic/plasmacytic IBD go on to become small intestinal lymphoma. In these cases the outlook worsens. Lymphoma can be controlled for months and sometimes years, but rarely cured.