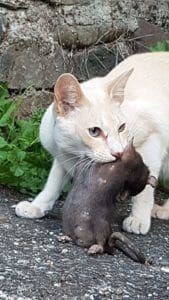 Cats are more important than ever as rodent exterminators in Nelson city. There is a booming population of rats and mice this autumn. Trapping on the Grampians has caught 47% rats than over the same period last year. https://www.stuff.co.nz/nelson-mail/news/112581824/food-fuels-boom-of-rats-and-mice-moving-into-nelson-homes

Birds on Grampians coordinator Bryce Buckland told me they have trapped 3000 rats over the last 10 years. A great effort. Every rat caught is a potential bird killer and is breeding more of them.

The winner of our first Halifax Veterinary Centre Hunter of the Year competition was bringing home 300 rats a year on the Port Hills of Nelson. As many as all the trappers on the Grampians. Roger is still going strong. That is exceptional but cats certainly play a major part in suppressing rodent populations in our city. Our Port Hills garden has numerous birds.

Both cats had been rehomed after being brought to Halifax as lost or injured waifs. Henri was found under the Hardy St bridge at about 3 months of age. With no owner found after 2 weeks he was rehomed to Louise and Brett.

They stepped up again a year ago to give a home to Izzie. At just 6 weeks old she was run over out at the Glen. With head injuries and skin stripped off the tail she was too feisty to examine properly. We treated her daily for 2 weeks and over about 3 weeks she settled down.

Henri is an avid rabbiter. He had just been entered in Halifax Hunter of the Year when Izzie caught on. Louise and Brent tell the story:

Henri is our little rabbit-catching machine and because we live on the periphery of The Brook Sanctuary, we like to think he’s doing his bit for conservation ????.

Henri is 2 years old, a small cat, but very fast.  He has his breakfast at 4.15am every morning, then takes off to the surrounding rural blocks to catch rabbits.

On a good week he catches up to two rabbits a day, every day. 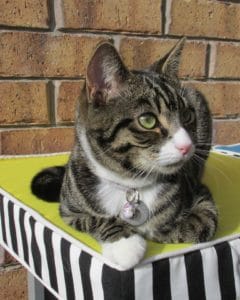 Henri is a skilled rabbiter

On a slow week he catches two rabbits a week.

He started catching baby rabbits when he was 1 year old and he’s now hunting teenage to adult rabbits.

Henri always carries his rabbits all the way home and dumps them unceremoniously on the garage floor, so I can do ‘something’ with them for dinner.

We have three other rescue cats in the house, all females, and he brings every rabbit home to feed the whole pride.

We have never been able to get a photo of Henri and his rabbits, because he dumps them in the garage and then takes off to get another one.

By 3pm Henri is home again, really tired and ready for dinner.  He then sleeps for eight hours and starts again at 4.15am.

Because he is such a good hunter, Henri has three bells on his collar, so he doesn’t catch birds.  I’m surprised the rabbits haven’t caught onto the sound of his bells yet ????. 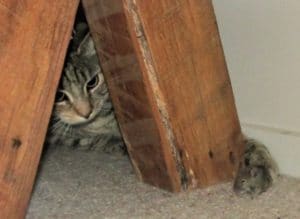 ????  She’s pigeon toed at the back and is slightly cross-eyed when she’s tired

????  But she just caught her 1st mouse and Mr Henri is soooo proud of her 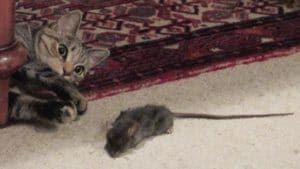 Izzie brings in her first rat

Mr Henri and Miss Izzie share the prize of $300 worth of products and services of their choice from Halifax Veterinary Centre.