Have you seen that TV ad where the chemist compares an asthma attack to breathing through a straw? Did you try it yourself?

It is really hard!

Here’s another thing to try.

Breathe in through your nose. Now gently pinch your nostrils together slightly. Notice how much harder it is to breathe in when your nostrils are narrowed just a little bit.

This is the experience of thousands of dogs who suffer from brachycephalic syndrome. Brachycephalic (Greek for short-headed) syndrome refers to the breathing difficulties suffered by short-nosed dogs such as Bulldogs, Pugs, Pekinese, Shih Tzus, Boxers, Boston terriers, Griffons and Cavalier King Charles spaniels.

As you just experienced it takes just a small decrease in airway diameter to markedly increase the resistance to airflow.

Sidebar for the mathematically minded.

There are four components to the brachycephalic syndrome.

The first, and the only one visible externally, is narrowing of the nostrils (stenotic nares). You can tell if your dog is affected in this way by carefully watching its nostrils as it breathes in with its mouth closed. If the nostrils move inwards even slightly it is a sign of too much resistance.

As it becomes more difficult to breathe through their nose dogs will do more open-mouth breathing. This reveals the next component of brachycephalic syndrome – the rasping noise in the throat characteristic of an elongated soft palate. Though the bony structures of the nose and upper jaw (the maxilla) are shortened the soft palate oftens extends further back, partly covering the the larynx, the opening to the windpipe. As the air rushes past, the loose end of the soft palate vibrates creating a typical moist rasping sound. In more severely affected dogs the soft palate gets sucked partly into the larynx, becoming thickened and deformed.

This creates even more resistance to airflow so that affected dogs have to work even harder to create the big negative pressures required to suck air into the chest.

This causes the third component of brachycephalic syndrome – everted laryngeal saccules. There is an air-filled pouch on each side of the larynx just above the vocal cords. Persistent high negative pressures can cause the skin lining of these pouches (the laryngeal saccules) to balloon out into the airway causing significant obstruction.

Owners of an affected dog will usually notice a sudden deterioration in the activity of their dog and an increase in respiratory noise.

These first three defects can be corrected surgically but nothing can be done about the fourth. Many brachycephalic dogs have a windpipe (trachea) of much smaller diameter than other breeds of a comparable size. This adds to the breathing problems.

The breathing difficulties of dogs with brachycephalic syndrome get steadily worse unless they are only mildly affected. This leads to some drastic changes which are irreversible and worsen quality of life even more.

The first and worst of these is laryngeal collapse. The larynx acts as the guardian of the windpipe ensuring that food and water go down the gullet and not into the airways. It is a vital structure. But it is made of cartilage and prolonged negative pressures cause the cartilage structure to collapse inwards and become deformed. Breathing becomes even more difficult. There is no effective surgical procedure for correcting laryngeal collapse which does not have a significant risk of causing subsequent aspiration pneumonia. This is a serious lung infection that occurs when food or liquid goes down the airways. Cartilage is soft in young animals so laryngeal collapse develops in just a few months in puppies with marked stenotic nares and/or elongated soft palate.

The second is a form of heart failure called cor pulmonale. This happens because the dramatic negative pressure required to suck air into the chest makes the right heart chambers work much harder to pump blood into the lung tissue. The heart muscle thickens and the chambers expand to cope with the load but eventually there is right-sided heart failure. Medical management can only deliver limited success.

What does surgery involve?

The operation to correct stenotic nares is an elegant bit of plastic surgery. It involves taking out a small wedge of each nostril, and if done well, leaves little or no visible scar.

Correcting elongated soft palate is more difficult. It involves a sometimes tricky judgement call about how much tisue to cut off. Too little is ineffective but too much creates a risk of aspiration pneumonia. Goldilocks had it easy! Access is also a problem in bigger dogs. The soft palate is far back in the throat. Fortunately the soft palate tissue can be stretched quite far forward to make it more accessible to the surgeon.

If brachycephalic syndrome is diagnosed and treated early these are the only two procedures required. If laryngeal saccules have everted these can be dealt with relatively easily at the same time as the previous surgeries.

At Halifax Vet Centre we are experienced in performing these surgeries.

How do you know when to take action?

If your dog is an at-risk breed you should discuss brachycephalic syndrome with us or with your vet, and the extent to which your dog is affected. This can vary greatly from not at all to severe. Many owners of Bulldogs and Pugs, for example, consider their rasping breathing to be normal, rather than a sign of potentially serious disorder.

The physical changes do progress over time so some dogs which seem okay as adolescents will show more signs as adults. Be sure to discuss this issue at each annual health check.

Poor exercise tolerance is a common early sign. A healthy dog will be able to exercise actively for more than an hour and not be unduly affected by heat or uphill exercise. If this is not the case with your brachycephalic dog then seek veterinary advice.

A little known, but much appreciated, benefit of surgery for brachycephalic syndrome is a marked reduction in flatulence. Affected dogs swallow a lot of air generating a considerable volume of intestinal gas.

Winston’s photo is on our home page. This is his story.

Hayden and Katriana Campbell knew a bit about brachycephalic syndrome but because their bulldog Winston seemed bright and playful as a young dog they put off getting anything done. He was slowing up as a three year old so they took our advice and went for surgery.  The photo shows Winston partway through surgery. The right nostril has been corrected. The left is still severely narrowed. 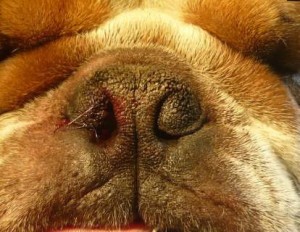 It was easy to see that Winston had very constricted nostrils but he didn’t actually sound very raspy when he was examined before surgery. It was surprising, then, to find that he had a very elongated soft palate, everted laryngeal saccules and was developing irreversible laryngeal collapse. The surgery was just in time.

“There is a noticeable difference after surgery” said Hayden eight months post-op. “He is nowhere near as breathless and much more energetic. This last summer he really wanted to play, whereas the previous summer he lay on the cold lino all day. Now he is not overheating and he is much more comfortable.”