Jean Gordon-Kirgan and Joan Flack are great cat lovers. Over the years they have visits from this wonderful character of a black cat who, neighbourhood lore has it, is a stray. He makes himself at home for part of each day and comes to be known as Mr NotSmith, to distinguish him from their very similar black cat visitor Mr Smith.

One frosty July morning he is found dead in the drive by Joan’s daughter Jennie, who rushes in to fetch Joan and Jean. But wait! When Jean picks him up he looks into her eyes and manages a tiny croak.
Straight in to the Halifax Veterinary Centre where vet Duncan Graham’s typo creates Mr `Knotsmith’. Duncan quickly assesses that what Mr Knotsmith is dying from is a blocked bladder. He is desperately cold – well under 30°C – and deeply in shock. Indeed, to mangle an idiom, he is death not very much warmed up. In spite of Duncan’s very guarded prognosis, Jean and Joan want to give Mr Knotsmith every chance.

The prognosis for Mr Knotsmith worsens 15 minutes later with the results of his blood tests and ECG. Because he has been unable to pee for some time his kidneys have shut down and there are terribly high levels of body wastes poisoning his system. Of greatest concern is the blood potassium level. At over 9 mmol/L, the highest we have ever seen (the normal range is 3.5 – 5), it is causing wildly abnormal heart beats.
But Mr Knotsmith hangs on in ICU, breathing extra oxygen, getting intravenous fluids, being warmed and, of course, having a urinary catheter inserted to relieve that terrible pressure in his bladder. He is too cold to respond. Indeed it is only after 90minutes of warming that he first reaches 30°C, still a long way from his normal 38.4°C. It takes four hours before intravenous insulin, bicarbonate, and the diluting intravenous fluids finally lower the potassium levels and restore normal heart rhythm.
It’s lunchtime; Mr Knotsmith is now conscious and responding and we would sigh with relief except we know that his kidneys may be irreparably damaged. His urine is a dark bloody colour and his bladder muscles are so stretched that they no longer work. It will be three or four days before we know the outcome for his kidneys and bladder.
Over these days Mr Knotsmith wins us all over. He is one gutsy cat, sweet and tolerant. Visits several times a day from Joan and Jean help greatly and after eight days with us Mr Knotsmith goes home.

But which home? The day after his discharge we get a call from a Suzanne Jones. Her cat has been missing. It has now returned but has got a strange skin complaint. It has lost large patches of hair on its abdomen. Vet Chris Welland sees the cat and is completely flummoxed until he realises this is Mr Knotsmith from whom he clipped lots of hair for ultrasound investigation!
So in the end he was not Mr Smith, nor Mr Knotsmith, but simply Squeak Jones. But he is not ungrateful, so when he is with Joan and Jean, which is most days, he graciously answers to Mr Knotsmith.

That part of Mr Knotsmith’s story happened in July 1999, and it was at the beginning of 2012 that Mr KnotSmith finally drew the curtain on a wonderful life. His kidneys had well and truly passed their use-by date. We estimate he was over 20 years old. He died peacefully at home with Joan and Jean.

This serious problem is the endpoint of a disease common to both male and female cats, but only males develop the blocked bladder problem. This is because the urethra, the passage out from the bladder, is much narrower in male cats than in females. It is especially narrow where it passes through the penis. If there are crystals in the urine these can get stuck there. Similarly if there is inflammation and swelling of the urethral lining it can block urine flow at this point.

Clients may notice their cat licking frequently at its penis, or squatting and straining to urinate in an unusual place or without passing anything. These early signs are often missed because most cats are very private about their toilet behaviour. In many cases it is not until the bladder is so distended that the cat is in pain that clients call the vet. Common complaints are “My cat is very lethargic and when I pick him up he cries”, or “What can you give cats for constipation? My cat is straining to go.”

This is already an emergency situation, but how did it develop?

It is a paradox but this disease, often called feline urological syndrome (FUS), is probably the most researched disease in feline medicine, yet we still lack many answers.

We do know a number of risk factors that contribute to the syndrome:

It is the involvement of the dietary factors that funded the large volume of research and led to the development of diets that prevent the formation of the most common crystals in the urine, as well as diets to dissolve these crystals. The widespread use of this information in pet food manufacture has led to a marked drop in the incidence of FUS where the magnesium containing struvite crystals are involved.

As the percentage of cases that couldn’t easily be explained and cured by diet grew, a new term was coined: feline idiopathic cystitis (FIC). Idiopathic sounds fancy, but just means we don’t know the cause!

Further research has found strong links between the way some cats respond to stress and the integrity of the protective lining in the urinary bladder. The bladder lining has a layer of glycosaminoglycans (GAGs) to stop the irritating chemicals and acidity of the urine damaging the tissues of the bladder wall. Some cats produce a poorer quality GAGs layer, and this is further damaged by hormones caused by stress. The pain of the resulting bladder inflammation in turn causes stress, creating a vicious cycle.

Treatment can involve pain relief, anti-inflammatory medication and increased fluids in the acute stages of FIC, and sometimes antianxiety medication. Owners notice small puddles of urine, often with blood, on the bathroom or laundry floor, and may see their cat straining to pee. The cat may even cry out.

Longer term dietary management, with an emphasis on water consumption, is important, as well as trying to reduce stresses for the cat. The feline facial pheromone spray Feliway is good at reducing environmental stress in cats, and there are many environmental enrichments that also decrease stress. (see below).

Nutritional supplements or injections to increase the bladder lining GAGs can also help. 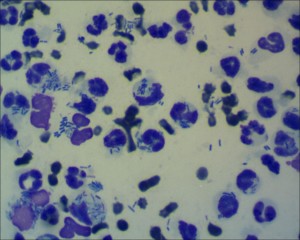 Infection is an uncommon cause of cystitis in cats but is seen occasionally, especially in older cats and these may need antibiotics. The signs can mimic FIC exactly, but simple tests on urine at the clinic make the diagnosis clear. Pus cells are seen, often full of bacteria they have gobbled up, as in the photomicrograph alongside. Sometimes just bacteria are seen, most commonly E. coli.

Sometimes a stone is formed in the bladder. Again the signs mimic FIC. Xrays are the single best test to rule out the presence of a stone.

Occasionally tumours form in the bladder wall and they can also cause the signs of FIC. Clumps of unusual cells in the urine are the first clue and ultrasound confirms the presence of a mass.

Have separate feeding bowls and litter trays for each cat, and keep them clean.

Feeding and toileting areas should be separate and in quiet, low traffic areas.

The entry/exit from the house should feel safe. For insecure cats, create a higher level entry/exit such as though an open window with ramp access.

Keep strays out by using programmable cat doors linked to a microchip or a device on your cats collar. Strange cats in the house are a very high stress event for cats.