BESTPRACTICE the key to NZVA award

Thanks for the many kind words

I do appreciate the cards, emails and many kind and thoughtful comments following my Outstanding Service Award from the New Zealand Veterinary Association (NZVA). You can read the article here if you missed it.

In considerable measure the award relates to my longstanding involvement with the BESTPRACTICE quality assurance scheme. 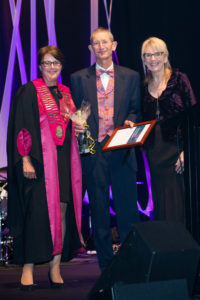 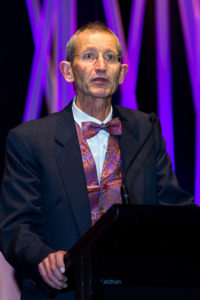 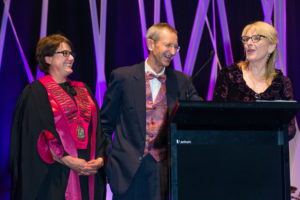 There is an important backstory which didn’t get a mention in the Nelson Mail article. It is about the significant part others have played in the evolution of the Halifax Veterinary Centre.

Tim Barraud, who started the practice at 46 Halifax St in 1978, was prepared to think outside the square and do things differently. One of his legacies is that we sit down with the client and their pets for the consultation and examination. It’s about relationship. If you go to almost every other vet practice in New Zealand you will find yourself standing on the opposite side of a much higher stainless steel examination table. Cold and alien for your pet and slightly intimidating and uncomfortable for you.

Duncan Graham was married to Tim’s favourite cousin Anna so when Tim moved on in 1989 we kept it in the family. Though older than me, Duncan had come to veterinary practice late and was much less experienced. Right at the outset Duncan wanted set the groundrules for our clinical decisions. They were to be based on the best science, not on our background of personal experience and anecdote. This involved challenging each other (especially me!) but set us on the road towards best practice. 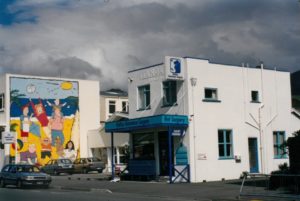 The old clinic at 46 Halifax St 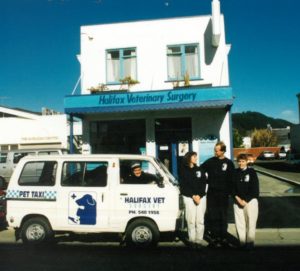 Our first pet taxi, Alex Gilchrist at the wheel

Tedi Busch joined us in 1991 bringing particular skills in eye problems. Duncan went off to the United States for a year to study dermatology and I began study for a post-graduate qualification in the medical problems of cats and dogs. While Duncan was away we employed a super-bright, compassionate and good-looking new graduate – Chris Welland. We already knew how good he would be.  A Nelson lad, he had been spending time in the practice during university holidays. 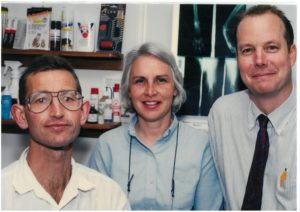 Hans, Tedi and Duncan at 46 Halifax 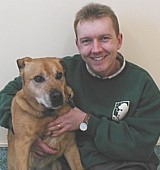 Chris with his dog Bianca

It was when Tedi joined us that we three sat down and nutted out just what it was we were on about. We realised that at the heart of what we did was the relationship people enjoyed with their pets. That’s when we came up with the  mission statement we still have today:

We enrich our community by enhancing the relationship people enjoy with their pets, by helping them live happier, healthier and longer lives.

This guided us towards a greater community involvement and a wellness approach.

As well as dermatology skills Duncan brought back the concept of Puppy Preschool from the United States. This ultimately got us more involved in solving behaviour problems and having an input into Council dog management issues. 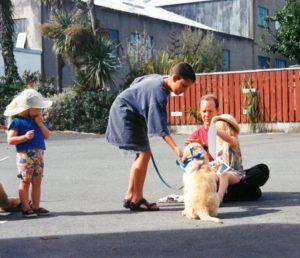 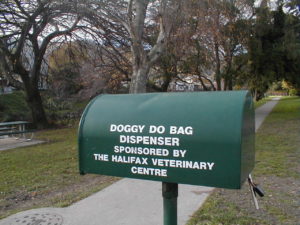 In 1994 and 1996 we entered the Commerce Nelson Business awards. Enjoyed success too but the biggest benefit was realising where we wanted to get to.

At that time the NZVA had developed the BESTPRACTICE quality assurance scheme. About twenty practices were accredited to Clinic Standards but no practice had ever tried for the top level Hospital Standards. It was expected that there would be just four or five of these practices, all in the main centres and employing specialist veterinarians to deal with complex cases.

It looked a daunting challenge but because we had outgrown 46 Halifax St and needed to build a new clinic we decided to give it our best shot. We were also seeing quite a lot of cases referred from other practices because of our extra skills.

Tedi’s organisational skills came to the fore here. She got onto the BESTPRACTICE committee and chivvied them to finalise the draft standards so we could design our new building properly. She wrote procedures and protocols so that our clinical practices would be delivered consistently well.

Architect Ellen Brinkman did a great job making our vision of the perfect veterinary centre a reality. We moved in in August 1997 and the building still looks fresh and modern 20 years later. It works extremely well for pets, clients and staff. 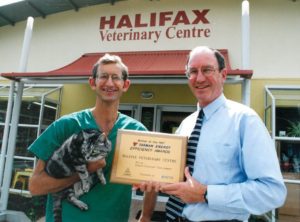 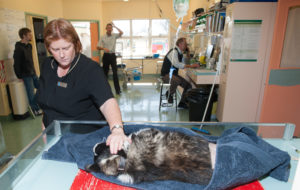 Michele checks a recovering patient in the ICU

Unusually amongst veterinary clinics clients can see through from reception to the treatment areas. We want you to be fully aware of the treatment your pet gets. You get the full set of detailed patient notes. All our open hours are visiting hours. These are significant differences from the norm in veterinary practice.

We were finally accredited to BESTPRACTICE Hospital Standards in March 2000. We were the first veterinary practice in New Zealand to achieve that status. It was to be more than 15 years till the next practice, at Massey University, achieved the honour.

Veterinary nurses Heidi Radel and Sharon Jones were with us back in 46 Halifax St and remember the stark contrast. We did some very good work there but it was rather like asking a gourmet chef to deliver a fine meal from a portable BBQ on a windy beach. It can be done but always in spite of, not because of the facilities. Now it is as if we are working in a designer kitchen. With a great team and good systems it so so much easier to deliver a good result consistently. 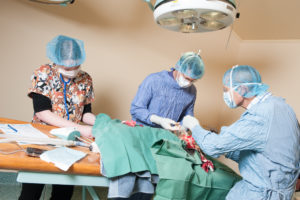 Hans, Todd and Vania in theatre 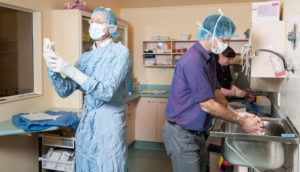 And with our approach it has been easy to attract and retain great staff who are dedicated to delivering the best care for your pets. That’s what keeps them coming to work year in, year out. Knowing they are doing something very worthwhile.

It is this personal experience of NZVA’s BESTPRACTICE quality assurance scheme that has driven my involvement with managing and promoting the scheme nationally for the last dozen years or so. The more veterinary practices strive for and attain BESTPRACTICE  accreditation, the better off pets will be. The goal is that half of the practices in New Zealand become BESTPRACTICE accredited at clinic or hospital level by 2030. At present still less than 15% are accredited.