We are now in the season that many Nelson pet owners dread because of a common weed – barley grass. It is common in most dog walking areas around Nelson so it is important to be vigilant over the summer and autumn period.

There are six species of barley grass in New Zealand, all characterised by a triple seed held together by a sharp-pointed barb. The distinctive long-tailed seeds (awns) resemble heads of barley. When the ripe awn breaks off the plant it exposes the sharp barb. This readily clings to animal fur and is the way the seed is spread to new areas.

Fine barbs on the tip of barley grass awn (Wikipedia)

are particularly at risk from barley grass.

then the hundreds of small spicules on the barb ensure that the awn will only go one way. Forward!

The ear is most commonly affected. Because ears are highly sensitive there is initial severe irritation and head shaking. Unfortunately this often works the awn further in. The irritation seems to become most intense when the barb reaches the ear drum. Once it penetrates the ear drum the ear shaking often subsides, but the real problems are just beginning. Bacteria and yeasts infect the inner ear affecting hearing and causing a chronic earache. The eardrum will repair itself but there is usually some watery or purulent discharge leaking through it to indicate that all is not well in the inner ear.

At this point your veterinarian will not be able to tell if there is a barley grass awn behind the healed but discoloured ear drum. The discharge will recur in spite of long courses of antibiotics. Surgical exploration by a procedure called bulla osteotomy is required. Sometimes the remains of several rotten grass awns are recovered. 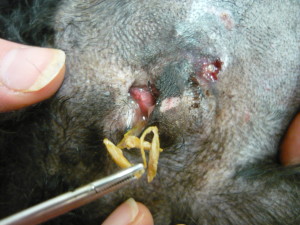 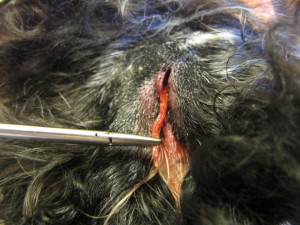 Barley grass between toes of a dog

The small pouch in the skin between the toes is the next most common point of entry. Affected dogs will lick at their paw and a small hole with a watery discharge, sometimes with some blood or pus, can be seen. The hole may seal up, only to open again higher up the foot if the awn is migrating. The tight arrangement of the foot bones usually prevents the awns travelling far up the leg, but it can also make them very hard to retrieve.

The armpits are another skin pouching area where awns readily penetrate. Here there is little barrier to movement and awns can migrate far, even into the chest cavity.

The conjunctival pouch surrounding the eye is another common area for awns to lodge. This is the most common site in cats. Fortunately migration from here is rare, but the ulceration and rupture of the cornea can cost your pet its eyeball. Thousands of sheep are afflicted in this way each summer by barley grass.

The worst problem is when migrating barley grass awns cause hidden infections deep in the body. These can be the source of mysterious pain and illness that is very difficult to track down. Blood tests, then ultrasound and even CT scans are part of our diagnostic process.

Prompt attention is the key to success. Removing the awns before they have migrated too far is so worthwhile. A stitch in time really does save nine!

If your dog starts shaking its head, rubbing its eye, licking its paw, or some other area of its body, check it immediately. If you can’t see anything in the ear, don’t assume that there is no problem. If you can find grass awns remove them, but be aware that there may be others which have penetrated further. It is common at surgery to remove more than one awn from the same site.

At surgery we need to track the barley grass from it’s entry point to its current location. This can be a painstaking and very difficult process in areas of the body where the awn can migrate freely and far. Ultrasound can be a useful tool both for diagnosis and for locating grass awns in some of these situations.

If you have an at-risk breed then a close cropped hair cut is the best prevention over summer. Good for general comfort too. If that seems too radical then clip the hair short around the ear openings and between the toes.

Be alert to the sudden onset of ear discomfort. Don’t ignore it just because it subsides in intensity. Bring it in promptly and we’ll check it out.

Get any small discharging wounds or weeping eyes checked too.